Claudia turns 5 tomorrow. We had her party Saturday. My Little Pony cake. Ice cream. Rented a "jumping house"--Moonpie put it on the deck--it was HUGE. Her favorite gifts were a toy cell phone, a dress up outfit and some lip gloss. Oh, and new colors--64! Count!! With a sharpener! 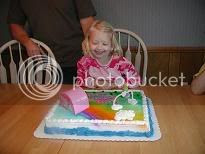 We rented "Robot" on Pay Per View--and then recorded it, so we can watch it 5,000 times (in a row). Carson will be a robot for Halloween. Claudia will either be a cheerleader or a "princess" (she has both outfits). I made Calie a Tshirt, it says "30% rolling eyes. 30% back talk. 30% deep sighs. 10% door slams. = 100% Teenager." She is wearing it tonight--going as a Sullen Teenager. She wanted to go as a hooker and I said NO. And now it is raining. We need rain--but I hope it stops.

Can't believe Claudie Bean is turning 5. Now I gotta go bake some cupcakes to take to school tomorrow! But first, I'm gonna put a few pictures on a few of the older posts--go check 'em out!
Posted by Momo at 11:04 AM

Happy Birthday Claudia!!! My 3 year old loooooves that Robots movie- I never even expected him to sit down and watch it all the way through but now its his favorite.