I did it. I called a counselor today. We have an appointment. Next Friday. I was sitting in the recliner today thinking "What are you waiting for? Lightening to strike and make everything OK?" So, I went to the phone book and called someone. A lady. She answered the phone. I asked about fees--she said she had a straight fee for single or couples. $50 per session (1 hour)--and if we need to, she can "work with us on the fee". She asked what the session would be for. I said "Well, we have been married for 17 years and last week he said he thought we needed counseling." She said it was really good that he had said that...that he hadn't "just left", that it showed he was willing to work. I hope that is true.

I called him at work and told him we had an appointment. I think he was surprised I actually CALLED and did it. I even called my sister and asked her to keep the kids that afternoon. Moonpie is off that weekend. And it's the weekend of Claudia's 5th birthday party. I hope it makes for a good weekend.

We've had a little trouble with Calie the last few days. Teenagers are so...I dunno. The least little thing sets her off. She wants to be treated with respect and feel like she is "grown up"--yet she acts so immature. Disrespectful and is very forgetful of any and all responsibilities that she is *supposed* to take care of (her dogs food and water and potty breaks...for ONE). I tried to talk to her. She is so touchy. She has an orthodontist appointment Thursday--I'll see if my friend E. can watch the boys--at least Carson. Maybe a little time with the bulk of my attention all to herself will get her outta this funk. This age is almost worse than The Terrible Twos (Threes and Fours).

Saturday Moonpie brought home the baby horse. She is 6 months old. Very cute. Very affectionate. Claudia named her "Daisy"--that's her "barn name", her *real* name is "Shez A Light Skipper". She let me brush her today. She kept rubbing her head on my back while I brushed her. Sweet. When I let her out into the small fenced off area, near the barn, she was so frisky and trotted all around, holding her tail high and almost skipping. So prancy (that's not a real word). Hard to be real jealous of her right now. 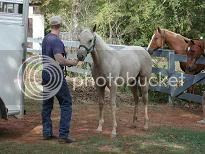 Moonpie shaved Carson's head again. He looks like he's on chemo. I know that with his double crown it is hard to have a 'normal' haircut--but does he have to SHAVE it? Can't he just cut it short? I mean he is BALD. Like an onion. But it does feel real soft--like velvet. I like to rub his head.
Posted by Momo at 4:24 PM

I hope the counselor is a good fit- if you don't feel comfortable with her in any way at all though RUN and find another one, it may take a few tries to get someone that really works well for you. Pics!! We need pics of the new baby horse she sounds so cute.

Teen years are worse than 2s and 3s? What on earth am I getting myself into here. I'm still holding out hope that boys are going to be a little easier (well at least my brother was definitely far less hormonal than I ever was during my dark years of teen angst and drama).

I agree with the counselor saying at least he wanted to work it out instead of just leaving. It's easier to walk away from things than to deal with them.