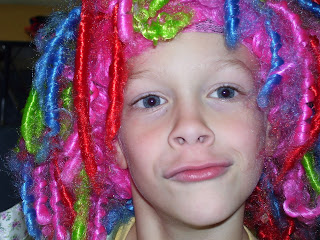 Last Friday I had been at work for 45 minutes when I was called to the the front desk for a phone call. It was the school. The Principal. Calling to tell me that my boy had punched another kid (with a fist) in the eye. And he was suspended. For the day.

When I got there, Carson was sitting in the office. So happy to see me. He kept asking "Mom. Mom! Why am I in here?" I finally got on my knees and faced him. I asked him to tell me what happened. Eventually he said "That boy was aggravating me and calling me names. So I hit him." Before he could get it all out the Principal said "I don't believe that Mom. He lies to us allll the time." I bristled. He may lie--but do you have to say it in front of him? He has already told me that his teacher thinks he is stupid. He hears all the labels. Stupid. Bad. Now Liar.

His teacher was called down to the Principals office to "tell me what he said yesterday". His teacher had walked out of her room. Leaving 19 kids in there. A few wondered out loud where she was. Carson said "She's dead. I killed her." The Principal looked at me (Oh! Carson said he didn't say the "I killed her" part) and said "If I was a paddling person, I'd have been using it today". THAT was the straw that broke the camels back. I stood up and told her "You will NOT talk like that in front of him. He does NOT need to be in here to hear you tear him down--and you will NEVER paddle him." Carson was escorted from the room. I asked both of them if they had ever received training regarding ADHD children?? Or ever MET one? The Principal informed me that she has a grandchild with ADHD. I informed her that they hear "bad", "stupid", "idiot" and "liar" enough from their peers. He needs people he can bond with, people he can trust, people he can respect.

Just then the school counsellor walked in there. The Principal said "Make his weekend miserable. Make it unfun. So he knows how serious this is". I wanted to choke her. The counsellor stood up and said "Everyone here needs to realize, this is a SIX year old with SEVERE ADHD--and obviously the meds aren't working like they should. He can't be held 100% responsible for his actions. He should NOT be punished all weekend. He will not understand that." I wanted to hug her. Take her out for Mexican food. Invite her over to watch movies. Bake her a cake.

Carson went back to work with me. He was quiet and reflective for the most part. The Director let him play video games in her office. On Sunday all 4 of my kids went to church--as well as the 4 kids who will be my step children. Carson behaved himself FINE. No problems. I'm beginning to think its the teacher. Or??? what?? He started taking 10mg of Strattera the first of this school year. Now he's up to 30mg. We are about out of options--the next me we could try would take a while to get in his system...and he would have to be CLOSELY monitored while on it. Blood pressure, blood work, heart. This is scary stuff. He's 6. He's not a big thing at all. He's skinny (the meds messes up his appetite). He's short. But he's adorable. And I love him with all my heart and soul.
Posted by Momo at 8:01 AM

Wow, thank god that social worker stepped in when she did, otherwise you may have been up for murder!!!

I think just being pulled out of school for the day is enough, not having to make a 6 year olds weekend hell. I'd hate to be the child of that principal.

Dill, at 7, got suspended for half a day for hitting another child (this kid pushed him off the monkey bars, so Dill hit him in the balls) He was devasted for being thrown out for the day, and it was enough, he hasn't had an incident since.

Thank God for a mom like you, Carson is one lucky boy. I can't believe the principal said that to you / in front of him. Amazing. It's too bad you don't have any other schooling options.

Great work on standing up but I wouldn't doubt you in a situation like that anyway.