A Day In The Life Of A 3 Year Old Preschool Teacher... 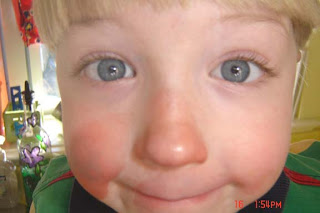 This morning, I got to work on time. But my OWN 3 year old wasn't feeling like being cooperative. He refused to get out of the car. "I don't wanna go here, I'm staying in the car!" I drug him from my car. Carried him to the building and laid him on the safety of the rug for his tantrum.

13 three year olds. That's right. 13. And they all have drama. Ashley doesn't want Kye playing with anyone but her. Keysen wants his 2 babies and his book alllll the time. Carlie needs her Key-Key (blanket). Joey sneaks around drinking out of everyone cup but her own--in hopes someone has something *good*. Casey wants to cry--but he wants to play too. Torn between making me thinks he's miserable and actually having fun. Drew wants to scream and run. All. The. Time. Madelyn tells me 4 times per hour that her "momma will be here in a few hours." Gawd...I WISH!! Bailey needs to "potty" but it's always too late. Braden is a climber--and a faller. Caden is mine...and up my butt crack, CONSTANTLY. Ian looks like an angel--but he is a contender with WWWF. Jack T. is autistic. He has an obsession with making sure the toilet seat is UP. and flushed. At least every 3 minutes. Today Jack T. was stung by yellow jackets on his finger, BAD, twice. Poor boy. I love this kid. Mainly because I have a troubled child (severe ADHD--Carson) and I know how much "trouble" it is for them to REALLY bond with someone--and Jack T has with me. And I with him. This boy is SPECIAL. He is.

Braden and Joey climbed onto a low table in our class. "Please get down, right now before you--" And Joey fell off. She didn't cry much, until she say her Mother at the dutch door. Then she was near death.

Madelyn bit a 2 year old visiting our class--ON THE CHEEK!

Toys everywhere. Shaving cream. Tiny turtles and frogs. Matchbox cars. I would have given my 3rd born (he has ADHD) for 2 Valium. Just 2. To get thru the day.

3 poopy diapers. Braden's smells like a grown mans. And he went twice. Mine went too. I hate that my son is THREE and not potty trained. I've tried it all. Bribes, threats...and everything in between. He's about to be responsible for cleaning it all up himself. I'm SICK of it.

Casey lost a sock. Eastin a hair bow (shes the 2 yr old). We painted with toothbrushes. We did tanagrams. Used big plastic tweezers to pick up small colored rocks and put them in ice trays. Read books. Did puzzles. Threw wooden blocks at each other. Shoved each other. Scratched each others faces. Bite to the face. Water fountain water allllll over the floor.

"Let's all see how loud Ms Martie will play that stupid "Kids Worship" CD!! Lets see how red her face gets and how sweet her voice is. Whoever gets called "HoneyBun" wins!!!"

I don't know how you can do it, I can barely tolerate me own children let alone others! lol

That photo is awesome. Beautiful eyes.

thats not even my kid...mine is soooooooooo much cuter. LOL