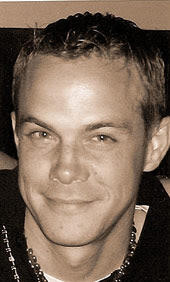 A few days ago (September the 1st) a man who was only 32 years old, wrote a letter and drove to a secluded area, near here.

Even as a child he was adorable--he was 8 years younger than I. I remember taking family vacations...he was there, so was his twin brother. They were the same. The same looking. But different personalities. Jeff was more reserved. Jake funny and outrageous. Silly. A comedian. We spent time together on the beaches of the Gulf of Mexico. Near Galveston, Texas.

Writing our names in the sand. Fishing. Running into the surf. Dragging our feet behind the Jeep--we sat on the tailgate and watched the drunks and scantily clad women make spectacles of themselves. It was like the Playboy Channel--but in real life!

Both boys were fun. Cute. Boys I wish were my brothers.

Jake recieved scholorships in baseball. He was an athelete. He loved to climb rocks. But he fell and hurt his back as a teenager. He had to deal with chronic pain for years. Recently he had surgery to cauterize nerves in his back--and to have a morphine pump installed.

All to no avail. Pain and depression go hand in hand. Some pain in psyical. Some in your head/heart. His pain was insurmountable. His depression over the pain--causing him even MORE pain.

Jake wrote a letter. And then shot himself in the head. Killing himself and ending his pain. Now, his young wife, mother, father and step parents mourn, his half sister...as does his twin brother--now alone, missing his other half.

We will miss you, young friend. And we will never forget. I am comforted only with the idea that you are no longer in pain.

I'm so sorry for your loss. Living in a small town helps foster deep relationships, I know. I hope Jake finds peace.

So sad. Makes you wonder what is so bad in the world to make you do that?

You can't make sense of it all.

My ex boyfriend hung himself 18 months ago (two months after we split), and I really still don't understand why, but was down to a split personality he hid so well.

Jake, I will always remember playing at the beach. My first time crabbing, telling everyone we caught all those crabs that Poppy payed for! Your dad's sunburned feet, and poking jelly fish with a stick. I hope where you are now you get to live the goodtimes everyday.

I'm so sorry you lost him. Sorry the world lost him. How handsome is he?! May Jake be where there is no pain - only happy memories of summers with you.