Tell Me About Those Towers That Were Brothers... 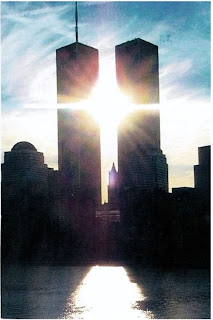 On September 11th, seven years ago. EVERYONE remembers where they were when they heard. Last night a checker at WalMart told me she was in class (college) and that her professor told her, but wouldn't allow them to leave. I can't even imagine.

I was pregnant with Carson. A full time, stay at home mom to Calie and Claudia. The (then)husband was in the shower when I heard Charlie Gibson reporting from "Good Morning America". I ran and told him what was going on, ... And I watched in...horror? As the second plane crashed into the tower. We both sat in front of the TV all day. Unable to leave it--but wanting to run.

When it was time to go pick Calie up from school, she was in 5th grade, I decided to push Claudia and the boy I babysat in the double stroller. I knew the traffic would be awful. And I wanted time to explain it to her. I walked 4 blocks to her school, crossed a busy street... and picked her up. She was very calm. Asked a few questions. And then seemed OK. The year before she had met a girl at Ranch Camp and *her* birthday is September 11th. Calie was worried about her new best friend, worried that everyone would be sad on her birthday from now on. (HAPPY BIRTHDAY RITA!!!!)

I worried about the baby I carried in my belly. I had 5 months left to go before his due date. I worried that I was bringing him into a world so full of hate and strife. I was emotional. Call it hormones. But every story on the news had me bawling. And yet I couldn't *not* watch! It made me think of when I was home on maternity leave with Calie. February 1991. Desert Storm was on 24/7. I cried a river then too...every day another story about a dad leaving his newborn--or even a mother. I was amazed at their strength to leave their new wives, new children... and some never came back. And the ones who came back were forever changed.

And then so many from September 11th didn't come home either.

Today our school asked that everyone wear red, white and blue. My class made a paper flag to hang on our door. The stars were painted by the kids. And we made "hand print flags". I painted the lower part of their palm blue and every other finger red or white. They were really cute. The kids LOVE to paint.

After the school age kids got to our school for "after school care", Carson ran to me. Told me he had a "so-so" day. Then he asked me "Momma, Tell me about those towers that were brothers." I knew what he meant. They were "twin" towers. So they must be twin brothers...

Still thinking of those who never made it...and to those who did...and those who were left here alone.
Posted by Momo at 1:26 PM

What really shocked me on this day, was a news program on the 9/11 faker. I can't believe womone would pretend to be in this and weren't. Disgusting.

sorry meant to say 'this woman' don't know what happened there, apart from late at night and too many absolut vodkas! lol