Oh, Mandy. You Came And You Gave Without Taking... 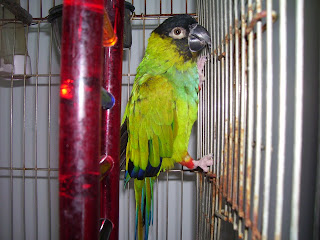 Oh, my. Mr X brought me home a gift last night. I didn't even know I wanted this until he called and whispered in my ear...asking me if it was something I might be interested in. Her name is Mandy.

Her name WAS Wimpy. Yes, Wimpy. Until we tried to hand her a cracker and she took it from us...and threw it on the bottom of her cage.

Mr X has a Janday Conure (a type of parrot). His name is George Or GeorgiA--we aren't *sure* of his sex--conures don't really have it hanging out to see. Mandy is a Nanday Conure. She is 15 years old--middle age for a Nanday Conure. George is 3 or so. George can say "grace". Yeah, so Sweets says "George, say grace". And he does. Grace. Grace. Grace.

Mandy can say "Goodnight, Wimpy". And a bunch of stuff that we can't figure out. I know that Mandy is a girl--because she laid an egg once. Or so her former owner told Sweets. So Sweets is convinced that "George" (now I cant help but question George's sexual orientation as well as what sex HE/SHE is...) has a girlfriend. We already learned online that our birds DO often mate outside their breed. So, he's gonna buy a small cage tonight and bring George over to my house and put him near Mandy--see if sparks fly. Or feathers.

So romantic. haha. Hopefully Mandy and George fall in love like Sweets and I did...fast and furious. Mandy has a scary looking beak. Hope George isn't intimidated.

PS: Claudia (my 7 yr old) has wanted a bird since she could breathe. When she comes over to my house on Sunday she will be surprised and thrilled!!! I am almost as excited about *that* as I am that I have Mandy here.
Posted by Momo at 7:23 AM